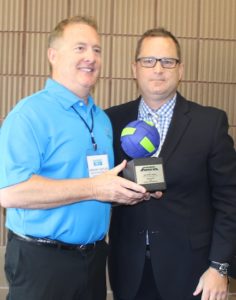 The Nate Belkin Award for Excellence in Marketing Reusable Textiles recognizes the person and / or organization that has most effectively realized ARTA’s mission to create greater awareness and appreciation for reusable textiles.

Greg Gurtler provided steady leadership for ARTA as president from 2003 to 2005, and as a director for several terms. It was under his presidency that ARTA first allowed operator members, which expanded ARTA membership significantly. In addition, Gurtler has generously supported ARTA by providing staff, such as Steve Tinker and Kevin McLaren, to serve on the board and support ARTA initiatives. Gurtler Industries is a family-owned chemical manufacturer based in South Holland. Greg is the second generation providing leadership for the company.

In addition, ARTA recognized Kevin McLaren, with the VIP Award. Kevin, the director of R&D for Gurtler Industries, has played a key role in overseeing the ARTA C.diff study for the past two years.

About the Nate Belkin Award

The award is presented every two years at the Clean Show, during ARTA’s Member Breakfast typically scheduled the second morning of the show. Nominations are open to all ARTA member companies, both laundries and allied companies. The winning person or organization receives a custom trophy to showcase in their lobby or executive offices and two complimentary tickets to the ARTA Breakfast at Clean.

A committee of suppliers and operators formed from the ARTA Board of Directors reviews the nominations and selects the finalist. Nominators are asked to complete an online application form, which includes a 200-word summary on the rationale for awarding the recognition to the company being nominated. The Nate Belkin Committee may contact finalists, as needed, to learn more about their entry.

ARTA is a membership of allied associates, suppliers, operators and manufacturers that support the textile maintenance industry. Our mission is to create greater appreciation and demand for reusable textiles — those cloth products that are reused rather than thrown away like paper disposable items. Our members represent all facets of the textile maintenance industry: manufacturers of textiles, machinery and chemicals, as well as suppliers, sister associations, and the operators who clean and deliver clean linen and garments to customers in a variety of industries.